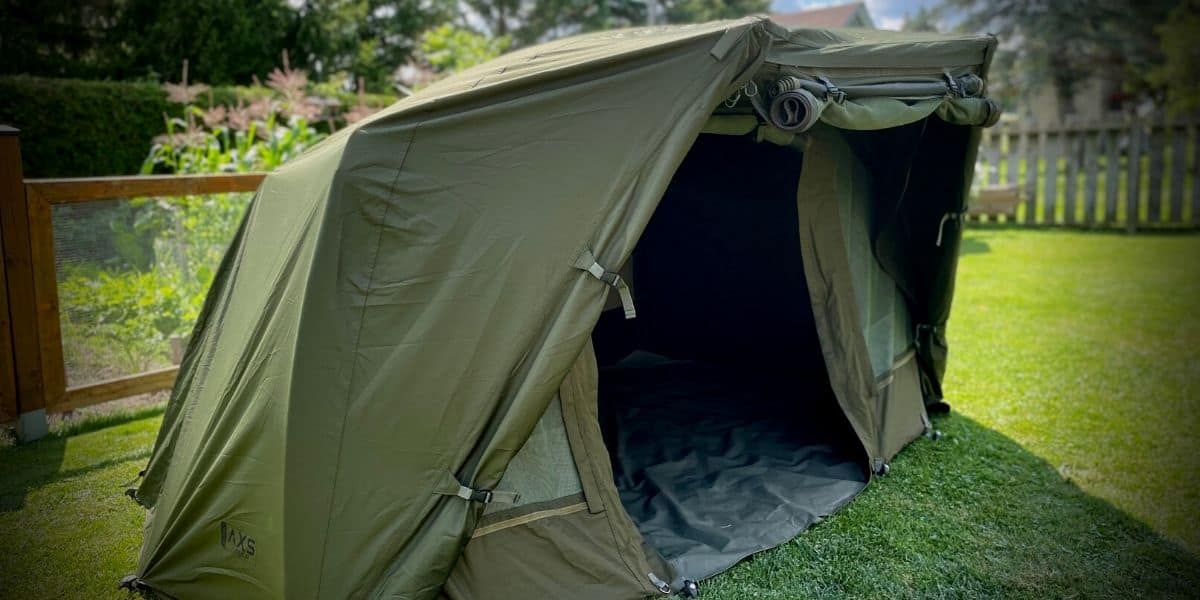 A bivvy is one of the most expensive pieces of kit a carp angler will invest in. I did my research and looked into every aspect of carp fishing bivvies before deciding to purchase one.

I opted for the Sonik AXS Bivvy, and although I love all the features, a few issues have popped up after using it for a few years now. This is a must-read review if you’re considering investing in a Sonik AXS Bivvy.

After many years of hands-on experience, I can see that some features are made with cheaper materials. In some areas of the bivvy, these materials are fine but integral parts should 100% be strong quality materials which, unfortunately, the Sonik AXS Bivvy lacks.

For the most part, the Sonik AXS Bivvy has held up to the test of time. This Bivvy comes in at a cheaper price than other high-end bivvies on the market that boast many of the same features.

I was curious how it could compete in such a market. For those looking to purchase this bivvy, the review below should clearly clarify the Sonik AXS Bivvy’s pros and cons in greater detail.

When you purchase the Sonik AXS Bivvy System, almost everything you need comes in the box aside from the overwrap. I purchased the overwrap separately and have rarely used it because the bivvy stands up to most weather conditions quite well.

Of course, the bivvy comes in the box. It is made of 10,000 HH Fabric that is quite thick. I’ve been impressed with how well it blocks the sunlight. One of the main features I look for in a bivvy is its performance in wet conditions and on hot sunny days.

The Sonik AXS Bivvy comes with a full in-fill panel which is quite impressive. It has a fully enclosed front with three mozzie mesh vented windows and a PVC window covering for cold wet days. One downside is that the zipper is made of plastic that attaches the infill panel to the bivvy.

The Sonik AXS Bivvy comes complete with standard Bivvy T-Pegs. Quite durable with an added metal piece on top of the plastic handles for hammering.

Some cheaper bivvies lack pockets to store gear. The Sonik AXS Bivvy has spacious pockets built into every window. Easily accessible from your bedchair, the see-through pockets are great for easily finding items such as receivers, car keys, phones or your wallet.

I’ve noticed that some of the cheaper budget bivvies on the market come with very thin groundsheets. They’re basically a tarp. The Sonik AXS Bivvy comes with a Heavy Duty Clip-In Ground Sheet. It is easy to clean and has no signs of damage after years of use.

I like the fact that the Sonik AXS Bivvy comes with a spacious carry bag. The full-length zip allows for quick pack away. The bivvy, in-fill panel, ground sheet, storm poles and pegs all fit inside easily. The addition of straps and tension clips are nice to snug everything up.

Two Storm Poles come with the Sonik AXS Bivvy. They come in an added storage bag, which is a nice touch, although it is made of cheaper material similar to a tarp.

The rods straps on the Sonik AXS Bivvy are quite durable. They’re made from an elasticated fabric that easily stretches over rods holding them securely in place with velcro. The added rubberized branding on the tip is a nice touch for easily gripping them in wet conditions.

You can see that you get a ton of value for the money when purchasing a Sonik AXS Bivvy. With many other bivvies on the market, you just get the bivvy itself and then have to purchase the other items separately.

Most of the other reviews I watched or read online before purchasing the Sonik AXS Bivvy covered the main aspects and selling points. There are some other features that I was pleasantly surprised by while using the bivvy.

The inner seams on the Sonik AXS are fully taped with waterproof material. An aspect I never thought to look for when choosing a bivvy. This added layer has kept me dry on many rainy sessions.

When the Sonik AXS Bivvy first came out, it was one of the first to have rear vents. A must-have feature for me on any bivvy now. On hot summer days, the added breeze blowing through your bivvy can be a lifesaver.

Although they’re made of plastic material, the anti-twist poles are a great feature. Just line them up and slide them in. I have had zero issues with them as the plastic is durable and hasn’t cracked or deteriorated.

Not only does the Sonik AXS have rear vents, but it also has three vent panels on the front as well. The waterproof fabric covering the vents easily unzips and is held securely in place by elastic tabs once rolled back.

Although these aren’t flashy, make-or-break features, they are aspects I will look for if purchasing a bivvy again.

Sonik AXS Bivvy Over Wrap – Is it Worth Buying?

When I purchased the Sonik AXS Bivvy, it was the perfect match for me. I figured this would be the only bivvy I would ever need, so I opted to buy the entire setup plus overwrap. Although I haven’t used the overwrap as much as I thought, it has saved me on a few sessions.

The overwrap is made out of the same 10,000 HH Material as the Bivvy itself, and I was surprised by some of the features it came with.

The Overwrap is equipped with the same design and velcro door panels as the in-fill panel that the bivvy itself has. The zippers also allow the door to be rolled and clipped up, fully removed or rolled down letterbox style.

The overwrap comes with its storage and carry bag. It is not as convenient as the design of the Sonik AXS Bivvy bag as it has no zipper. Just a drawstring and open top, which can be tricky to get the wrap back into.

The front of the overwrap has a neat design that allows anglers to roll back the storm poles while still attached to the outer shell. This can allow added ventilation during dry spells and allow anglers to close the shelter quickly.

The bivvy has stood up to torrential rain storms and heavy wind while pegged down. The only session that I really appreciated the overwrap on was a cold rainy session in October on the St. Lawrence River, where we experienced over 50 hours of heavy rain.

One Thing I Would Change About the Sonik AXS Bivvy

This review has been very positive so far, and I am quite impressed with all the features of the Sonik AXS Bivvy, especially for the price point. If I would have done this review right after purchasing the bivvy, it would have been 5 stars. The reason I only gave it 4 stars was due to the design of the spreader block.

I know that to make more affordable products for carp anglers, some companies choose to make certain features out of cost-effective materials. The spreader block, being the main hub of the bivvy, should be designed so that it will not fail. Sadly the Sonik AXS Bivvy’s spreader block has one major flaw.

I noted that the spreader block was a durable plastic material when I first took it out of the box. I made sure to take great care when setting the bivvy up and taking it down. Recently, after a few years of using the bivvy, either side of the inserts for the front supports have started to crack. I will most likely repair them with hose clamps but with a few tweaks to the design by reinforcing either side; this could have been avoided.

These points see the most pressure once the bivvy is fully erect as they hold tension on all the ribs and fabric.

We pride ourselves in honest, hands-on reviews, not just sales pitches, to gain an affiliate commission. We hope this review has been helpful. I still love my Sonik AXS Bivvy and will continue to use it for years, although thought it important to include the one flaw of the spreader block issue…on second thought, there is one more thing I would change…I would buy the Camo Version Sonik has since released!

For more information, be sure to check out our Recommended Carp Fishing Gear.

Sonik recently released their lineup of “Pro” series reels. The reels come in two different versions, one with a free spool function and one without. I recently purchased a set of three 12′ rods this year and needed some reels to match. Needless to say, the price point was bang on for the much-needed upgrade… 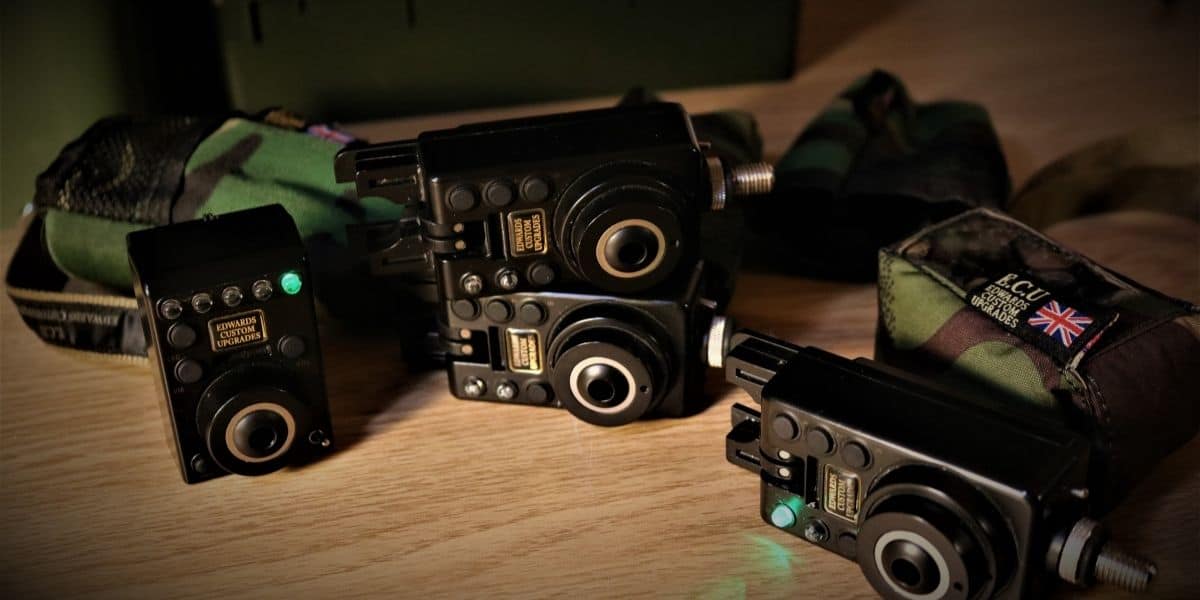 I was lucky enough to recently get my hands on a full set of the Edwards Custom Upgrades ECU MK1 Compacts to use for a few weeks and write a review on. I’ve always wanted to see these alarms in person to see what the quality is like. They’re one of the more expensive carp…

I’ve used the Sonik SKS Bite Alarm and Receiver Set for a few years now and cannot fault it whatsoever. This was my go-to set of alarms on the bank for many years. What I like most about this set is the compatible Receiver and Bivvy Light, which are paired with each alarm. We will…

I recently purchased the Cygnet Sniper Weigh Tripod V2, and must say, I am quite impressed with this product straight out of the box. I’ve always been a fan of Cygnet products, every piece of Cygnet kit I own has stood the test of time and is still going strong. I am quickly becoming a…

"This site is owned and operated by Improved Carp Angling, which participates in some affiliate programs and is compensated for referring traffic and business to these companies."